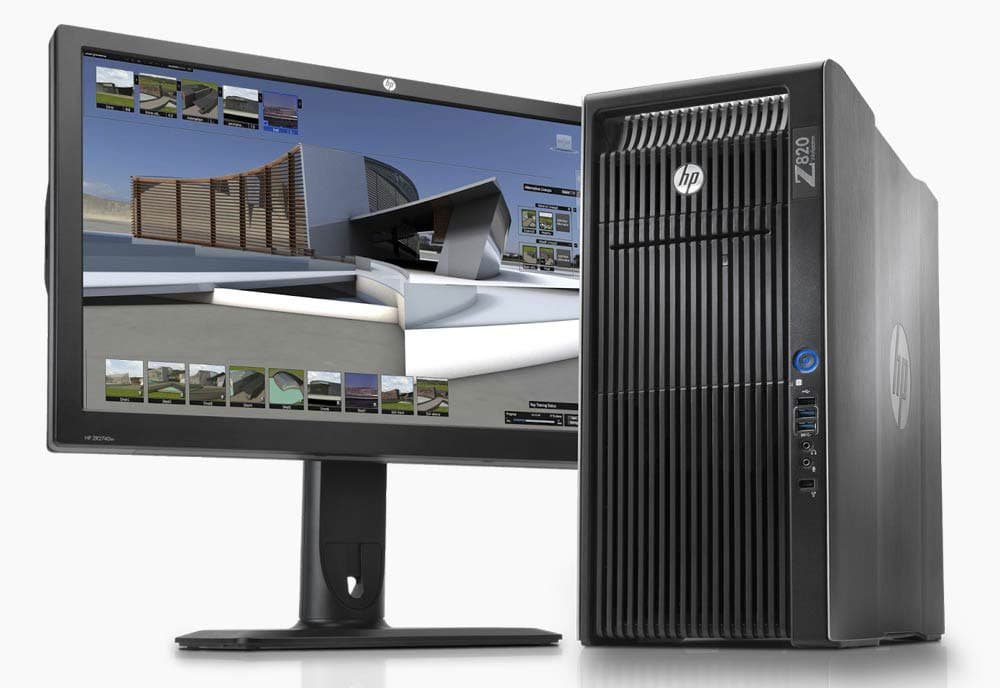 The HP Z820 professional grade workstation was released in April of 2012. It brought a whole new level of resource pool capabilities to HP’s workstation line. Previously the Z800 supported Intel’s Xeon 5600 series processors which allowed up to 6 cores per processor and support for 1333 MHz RAM. It also allowed a maximum capacity of 192GB of memory capacity, which at the time was good. Times are a changin’ though.

With Moore’s Law in full effect, the Z820 workstation left the previous generation in the dust. Right out the gate, this model supported up to 512GB of memory running at up to 1600 MHz. Also, once Intel released their Xeon E5-2600 series V2 processors HP made sure that was also supported. With this update you can now get up to 12 cores per processor for maximum multi-core utilization. Although CPU and RAM specs are important, they definitely aren’t the only thing that looks good for this workstation. Back when HP set out to raise the bar on chassis design with the first Z series workstation, they paired up with the design team over at BMW to make a functional and outstanding look.

Let’s start with the functional aspects of this design. Every tech head knows that one of electronic devices greatest advisories is heat due to the computations that are occurring within the device itself. This is why aerodynamics is exceptionally important when designing the chassis. HP took this very seriously by allowing a fully permeable front face so fresh cool air can make its way into the frame with as little resistance as possible. Next they not only made the entire inner area compartmentalized to increase cooling to specific areas but they did this while maintaining a tool-less design. By utilizing air flow baffles throughout the inner compartments your workstation will be receiving increased airflow to the most utilized components such as CPU, RAM, and PCIe slots which can hold up to 2 high-end GPU’s from NVIDIA’s Quadro / Tesla professional graphics card lines. The HP Z820 can be custom configured and purchased directly at HP Z820 Workstation TwinCCG Store

Now that function is out of the way, let’s get to fashion. Prior to HP’s remodeled look for the workstations it was seldom that you would come across someone’s work area and think, “Hmmm, that’s a nice looking computer.” The Z820 is sure to turn heads with sleek bushed aluminium side panels featuring crisp edges and widened front and back design. The tower also features front and back handles on top of the chassis to allow for easy handling and a beveled bottom with slide edges so you can easily pull the workstation out from underneath a desk without it catching on the floor.

Now that we’ve covered the bread and butter of the workstation through design and computation capabilities, let’s get to the visually stunning performance. The Z820 was designed to use the latest PCIe technology at the time of release which runs on PCIe Gen3. It supports dual GPU on 2 x PCIe 3.0 x16 slots which, depending on your budget, can give you some of the best graphics performance on the market. For example, by pairing an NVIDIA Quadro K6000 graphics card and Tesla K10 GPU you’ll have a combined memory bandwidth of 608 GB/s. That along with support for up to 4 displays through the K6000 pushing 4K video means you’ll be looking at seamless and stunning displays all while pushing some serious GPU potential.

When you couple all of these features with the fact that major animation studios such as Dreamworks relies solely on HP’s enterprise technology to make their blockbuster movies you can be confident in using the same technology to help your business grow to new heights.

When Dreamworks was making each of the parts to Shrek, one of the biggest names to hit the big screens since Buzz Lightyear, they counted on the hardware from HP and only HP which is no small measure. Every designer had access to HP’s workstations so when they needed to put the pedal to the metal, they could be sitting next to the brushed aluminium powerhouse with a cup of the strongest coffee to fuel their ideas and bring them to life. Even RED, one of the biggest names in 4K and above hardware went straight to HP to design a workstation with full compatibility for their camera technology so their customers would be sure that when they bought a new setup it would work every time, no questions about it.